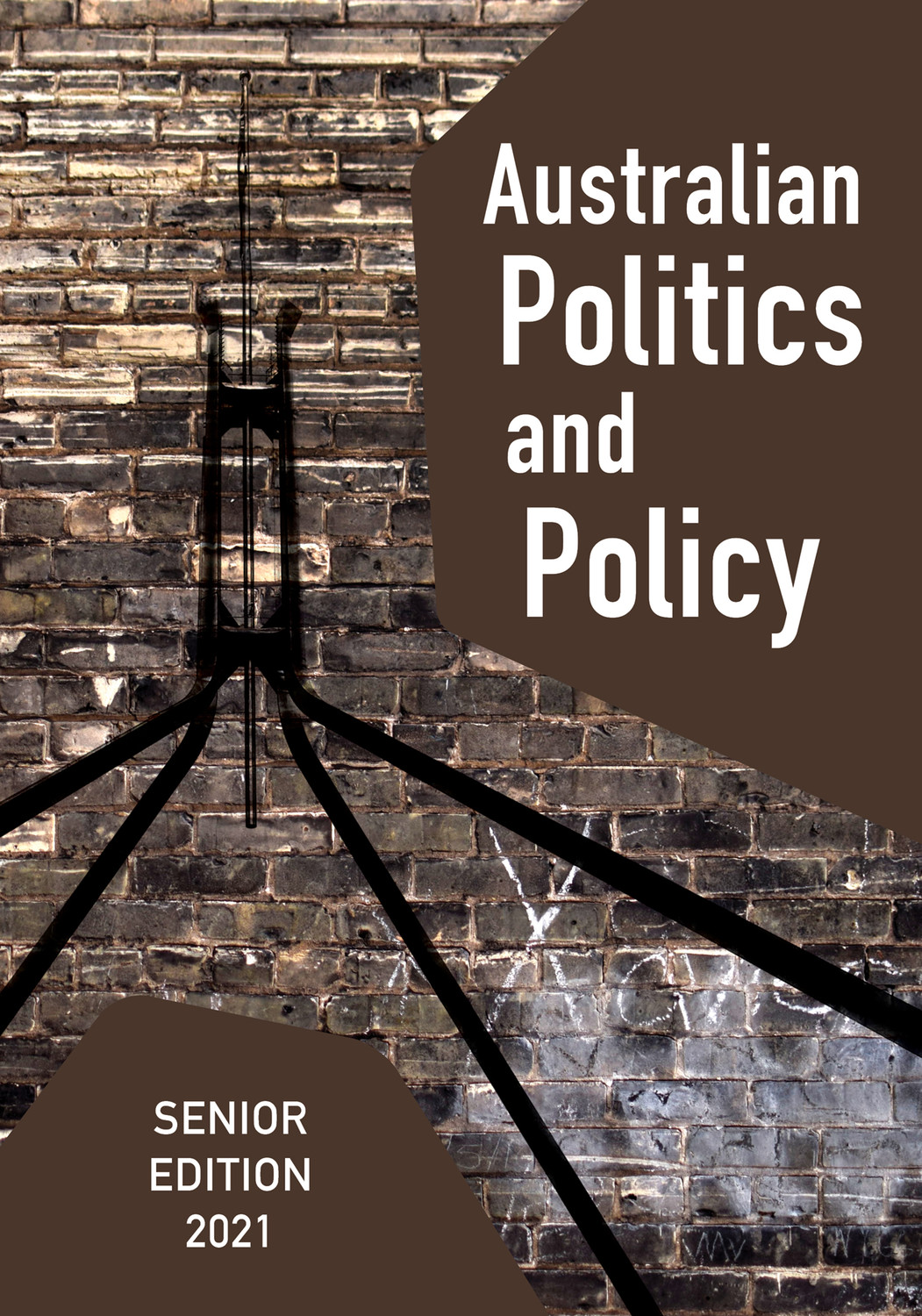 The first completely customisable, open access textbook on Australian politics, Australian Politics and Policy provides a unique, holistic coverage of politics and public topics for use in junior and senior university courses. With an online database of 43 chapters, the book innovatively enables instructors to compile a bespoke edition to suit their teaching needs, or to include individual chapters in course readers.

Each chapter was subject to anonymous and rigorous peer-review to ensure the highest standards. The textbook comes with additional teaching resources including review questions and lecture slides.

This second edition contains a number of revisions and new chapters on educational policy, the governance of COVID-19, and political leadership.

The senior edition is aimed at later year undergraduate and postgraduate students.

Dr Sarah Murray is an Associate Professor of Law at the University of Western Australia. She researches in the areas of constitutional law and court innovation. Dr Murray's PhD thesis was awarded the 2011 Mollie Holman Doctoral Medal for Law by Monash University and was published as The Remaking of the Courts - Less-Adversarial Practice and the Constitutional Role of the Judiciary in Australia (2014). She is the co-author of The Constitution of the Commonwealth of Australia - History, Principle and Interpretation (2015) and Winterton's Australian Federal Constitutional Law: Commentary & Materials (2017), and co-edited Regulating Preventive Justice - Principle, Policy and Paradox (2017).

Dallas Rogers is the Program Director of the Master of Urbanism, School of Architecture, Design and Planning at The University of Sydney. His recent books include a monograph on The Geopolitics of Real Estate: Reconfiguring Property Capital and Rights (2016), edited book on The Globalisation of Real Estate: The Politics and Practice of Foreign Real Estate Investment (2018), and an edited book on Housing in 21st-Century Australia: People, Practices and Policies (2015). Dallas is the host of City Road Podcast.

Diana Perche is a Senior Lecturer and Academic Coordinator at Nura Gili Indigenous Programs Unit at UNSW Sydney. Prior to this, Diana lectured in public policy at Macquarie University from 2005-2016, and was the director of the Master of Politics and Public Policy. Diana has worked in a number of policy-related positions, including in the Australian Public Service, and has a keen interest in the interplay between policy research and policy practice. Her expertise in Australian politics and public policy includes an interest in the use of evidence in policy formulation, and a particular focus on Indigenous affairs.

Ian McAuley is a retired lecturer in public finance, University of Canberra. Because of the prominence of health care in government finance he has taken a strong interest in the way Australia and other countries finance health care -- their mix of direct payments, public insurance and private insurance. He has delivered several conference papers of health funding and is the author, with Miriam Lyons, of Governomics: Can we afford small government? (2015).

Dr Jill Sheppard is a lecturer in the School of Politics and International Relations at the Australian National University. Her research interests are elections and voting, political participation, and public opinion, particularly in Australia but also internationally. She is an investigator on several major survey studies of Australian public opinion and behaviour.

Dr Madeleine Pill is a Lecturer in the Department of Government and International Relations where she teaches governance and public policy. Her research focuses on urban and neighbourhood governance and policy, most recently undertaking international comparative investigations into the effects of austerity on the collaborative governance of cities. Her work is informed by her experiences working in local and central government in the UK, state government in Australia, and as a researcher in the US.

Narelle Miragliotta is a Senior Lecturer in the Department of Politics and International Relations where she researches and teaches in the areas of Australian political institutions, comparative government and political parties.

Dr Paul D. Williams is a Senior Lecturer in the School of Humanities, Languages and Social Science, Griffith University, where he teaches politics, journalism and public relations. He has published widely on elections and voting in Australian journals, is a weekly newspaper columnist, and a regular commentator on Queensland state and Australian national politics in the print and electronic media.

Dr Robin Tennant-Wood lectured in political science and public policy at the University of Canberra and prior to that worked in public policy development in the Australian Public Service and worked in the community sector as executive director of a non-government organisation. She has written and taught on Australian politics and electoral politics, in particular politics and government of the ACT. Dr Tennant-Wood currently researches independently, and is a journalist for Fairfax Media at the Braidwood Times.

Dr Robyn Smith is a Conjoint Fellow at the University of Newcastle. She is a writer on Northern Territory politics, history and heritage. Her books include Turning 40: the history of the Northern Territory Legislative Assembly 1974-2014 (2015, with Dean Jaensch) and Arcadian Populism: The Country Liberal Party and Self-Government in the Northern Territory 1978-2005 (2013). Her journal contributions include the Australasian Parliamentary Review (2010-2015), Political Chronicles in the Australian Journal of Politics & History (2011-present) and articles for Northern Territory Historical Studies. She writes children's history books and is presently engaged on NT research for the national Mapping Massacres project.

Shalene is a senior lecturer in the School of Management and Enterprise at USQ. Her research interests include the regulation of work, workplace diversity and inclusion, and specifically attitudes to disability and chronic illness in the workplace. Shalene co-edited the book: Work and Identity: Contemporary perspectives on workplace diversity, as well as the Researching Diversity section of Labour & Industry (Vol 29, No. 1).

Susan Ressia is a Lecturer within the Department of Employment Relations and Human Resources at Griffith University, Brisbane, Australia. Her research focuses on the job search experiences of independent non-English speaking background skilled migrants in Australia. Susan’s research interests also include the areas of work-life balance, managing diversity, intersectionality, equality and social justice issues. Susan is co-author of Employment Relations: An Integrated Approach (2nd Edn) and Work in the 21st Century: How do I Log on?. She has also published in Gender, Work and Organization and the Asia-Pacific Journal of Human Resources.

Trish is an ANZSOG Visiting Fellow at ANU and a regular presenter in Crawford School’s Executive Education Program. Trish has a doctorate in history from ANU and a Diploma in American Studies from Smith College (USA). As a former senior executive in the Australian Public Service, Trish had a diverse career incorporating policy and program development, research and evaluation, and direct service delivery. Her social policy research interests include publications on early childhood, schools and employment services. Her current ANZSOG research project explores how theories of the policy process can be transferred and taken into practice.

Zoe Staines is a Research Fellow at the School of Social Science, University of Queensland. She has previously held research and policy positions in the Queensland Government, academia and the not-for-profit sector, and holds degrees, including a PhD, in criminology. Her research interests are social policy, Indigenous governance and social justice.

Isi Unikowski worked for three decades in the Australian Public Service in a variety of central and line departments and agencies, including the Department of the Prime Minister and Cabinet, the Australian Public Service Commission, the Departments of Social Security and Climate Change, Centrelink and others. He is currently in the final year of a PhD candidacy at the Crawford School of Public Policy, Australian National University, conducting research on the practice of intergovernmental management.

Jane McCormack has conducted research in academic, advisory, commercial and NGO contexts across a range of topics, including social media and the wellbeing of children and young people, and young people's participation in democracy.

Jason O’Neil is a young Wiradjuri man from Central West NSW. He completed a Bachelor of Laws and a Bachelor of Arts (Honours) in Indigenous Studies at UNSW Sydney, and a Graduate Certificate in Wiradjuri Language, Culture and Heritage at Charles Sturt University. Jason is involved in advocacy and activism on environmental and legal issues affecting First Nations people, and is pursuing a PhD at UNSW on ‘redefining Indigenous self-determination in Australian public policy’.

Andrew Parkin is a Professor in Flinders University's College of Business, Government and Law. Previously he was the University's Deputy Vice-Chancellor (Academic). A National Fellow of the Institute of Public Administration Australia, he has served as Editor of the Australian Journal of Political Science, President of the Australasian Political Studies Association and a member of the Australian Research Council's College of Experts. His academic publications span many aspects of politics and public policy, including immigration, housing, urban government, the Labor Party, federalism and South Australian politics. He was co-editor of nine editions of Government, Politics, Power and Policy in Australia.

David Peetz is Professor of Employment Relations at Griffith University.  He previously worked at the Australian National University and in the then Commonwealth Department of Industrial Relations, spending over five years in its Senior Executive Service.  He has undertaken work for unions, employers and governments of both political persuasions.  He is the author of Unions in a Contrary World (1998) and Brave New Workplace (2006) and co-author of Women of the Coal Rushes (2010), in addition to numerous academic articles, papers and reports, as well as articles for The Conversation.  He is a Fellow of the Academy of the Social Sciences.

Greg Marston is Professor and Head of School of Social Sciences at UQ. He has been researching critical social policy and the politics of policy making for nearly two decades. He is active in basic income, employment and poverty debates and is undertaking research into the role of welfare states in transitioning countries to a low-carbon future.

John Wanna is the foundation Professor of the Australia and New Zealand School of Government based at the Australian National University. Previously he was professor of politics at Griffith University, and currently holds a joint appointment with Griffith and ANU. He also serves as the national director of research and monograph publications for ANZSOG (with 55 titles produced to date). He has been engaged in research on the public sector in Australia since the 1970s and has many publications on public policy, public management, government budgeting and federalism. He has written over 50 books in the field, and over 100 journal articles and book chapters, and regularly writes the political chronicle for the federal government in the Australian Journal of Politics and History.

Professor Roberta Ryan is the Director of the Institute of Public Policy and Governance and the Centre for Local Government at the University of Technology Sydney. An applied policy expert Roberta works closely with local governments around Australia and internationally. She publishes in the fields of community engagement and local democracy, local governance, city planning and public sector evaluation. She is advocate for the role of local government as the key enabler of places which reflect the aspirations of local communities.

Rodney Smith is Professor of Australian Politics in the Department of Government and International Relations at the University of Sydney. Among other books, he is the author of Against the Machines (2006) and Australian Political Culture (2001) and co-editor of From Carr to Keneally (2012). He is the current editor of The Australasian Parliamentary Review.

' ... the scale of collaboration is significant - so is the technological savvy. The platform for the digital textbook uses the information architecture built for a new Sydney University Press platform ... '
Australian Publishers Association

Back to Professor Richard Eccleston