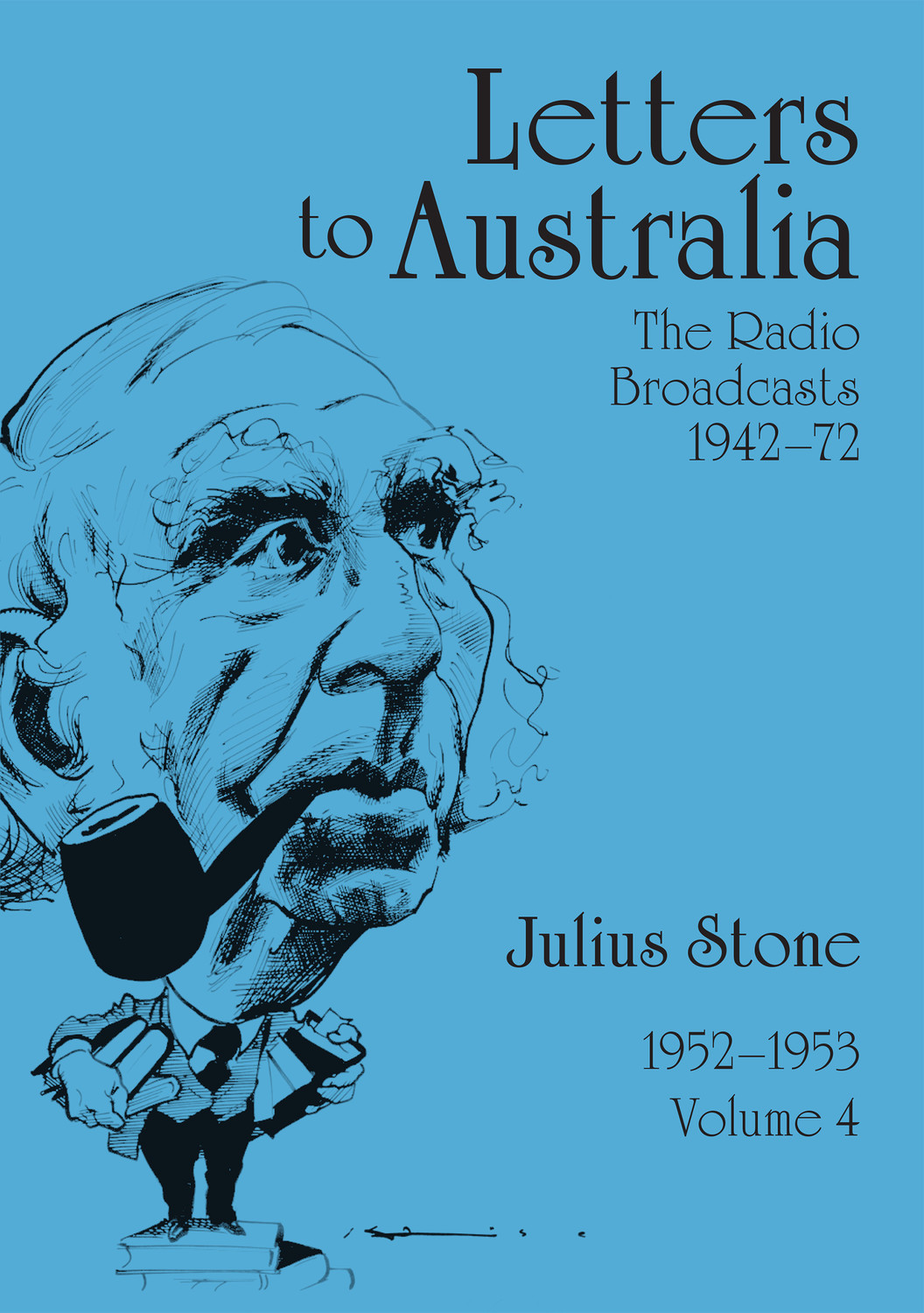 Letters to Australia is a collection of Julius Stone’s radio talks, originally broadcast by the Australian Broadcasting Commission between 1942 and 1972. Recently discovered in the nation’s archives, they take the reader back to the mid-20th century, bringing to life the people, events and the sweep of affairs during World War II and its turbulent aftermath, the hopes and fears of individuals and nations. They tell much of Australia’s role in that world and that era. More than anyone else at that time, Julius Stone gave Australians a sense that they were part of the world and could, and should, seek to influence these events. Volume 4 contains 131 essays from 1952 and 1953.

These years, like the two preceding, saw incremental change. The Korean War ended, but only after long negotiations over the fate and rights of prisoners of war; the debates over the development of unified economic and political structures in Europe grew; and, with Stalin’s death and Beria’s fall, the Soviet Union began its slow evolution towards glasnost and perestroika and eventual dissolution, decades later. In the Pacific, Australia entered a multi-lateral, ANZUS, excluded the United Kingdom, consolidating the nation’s independence of Britain; Communist China pressed its claims to replace Taiwan on the Security Council; Queen Elizabeth II began her long reign; and adventurism by Egypt set the stage for the Suez crisis of 1956. In Asia, conflict in Vietnam grew, even as war ended in Korea. In Europe, West Germany grew in economic strength, its position between east and west still ambivalent; while the Soviet grip on eastern Europe grew in strength, intensifying their autocracies. The east-west balance of the great powers, and seemingly endless talks on nuclear disarmament, continued; but even in that atmosphere of stalemate, the emergence of NATO and of the Warsaw Pact as military alliances created some change – the growth of a sense that a balance of power between East and West could be sustained, could be lived with. Julius Stone had much to discuss.

Selected contents – over 120 talks in total

Japan chooses between Taipei and Peking; the Australian reaction
Australia ratifies peace with Japan – US treaties with Pacific nations
Prospects in Korea, Soviet proposals for unified Germany, a commander for NATO
German re-unification – Soviet-US differences, German demands
African conflicts – racial in the south, anti-colonial in the north
Argentina clash over Falklands
Germany re-unification – is Germany ready for it?
Coups in Egypt, Iran – feudal realities
Origin and limits of the Council of Europe
Africa for the Africans – can they stand alone?
Fear corrodes the US polity – impact of the House Un-American Activity Committee
Korea – US contemplates blockade of China
Death of Stalin – reflections
Coronation – the agony of change, the survival of the monarchy
Korean truce signed! Post-Beria purge in Soviet sphere. McCarthyism attacked in the US
The work of the Red Cross; implications of UK advances in missile technology
ANZUS and the UK – looking east or west to China
Drawing a line: Australia legislates to limit Japanese pearling
Growing US-UK cooperation on nuclear policy
Eisenhower addresses General Assembly on East-West tensions